Last year, December especially, was brilliant for me as a blogger, and I’m hoping it is the starting point for even greater things in 2016. Highlights include:

My goal was to write four posts a month which I almost met. September was the exception and that was a tricky month as I was told I was at risk of redundancy and left the company within two weeks. This year I’d like to improve the consistency of when I post in the month because I think they tended to be bunched around the end of the month as I squeezed them in to meet the four/ month goal.

Read moreWhat you want to read

Despite my increased consistency I published fewer posts last year than in 2014. I think a large part of that is because I published extracts from my 1989 diary in 2014 and those posts didn’t exist for 2015 as I didn’t have a diary for 1990 (or at least not one I’ve found yet). My Words of Wisdom posts may return this year as I’ve found a diary I wrote in 1991 and it will be interesting to look back and share what I was doing 25 years ago.

After saying for two years that my categories were a mess, I finally sorted them out last year and introduced sub categories which I hope make the navigation with my new theme easier. But interestingly Blogging was still the category where I published the most posts even though I still don’t see darktea as a blog about blogging. Posts in this category include Upcoming blog events that I’ve replaced with the Blog Events UK website and my Goodread posts where I highlight blog posts I’ve enjoyed reading.

The top three categories are:

Again old posts dominate my most read posts, however there is one new post in there which is very impressive considering I  only published it in December. This list suggests I need to write more journal related posts, but admit I’m currently stuck for inspiration – what would you like to read on the topic?

The main source of traffic changed significantly from search to social media (although the search traffic is slightly better quality as those visitors stay longer on the site) and I saw a huge growth in traffic in the second half of the year due to social media. In line with this increase there is a similar increase in people coming to the site direct suggesting people maybe finding the site on social media and bookmarking it to return later.

Search terms remain similar to 2014 and again reaffirm that I should be writing more about journal writing!

I’d love the number of referrals this blog gets from other sites to increase as I like the idea of people having the time to browse rather just finding sites through search engines and social media. It is something I try to do because I like the adventure of not knowing what I’ll find. For example, when I write a comment on a site I often follow the link to the website of the person who wrote the previous comment with the thought we must have something in common if we’re commenting on the same post. I got the most referrals from:

I’ve developed my own blog planner based on the way my head works, and I’m hoping this is going to move me beyond the four posts a month. I’m also keen on spending more time off this blog and developing Oxfordshire Bloggers and Blog Events UK sites and communities more as I believe they have the potential to help lots of bloggers. 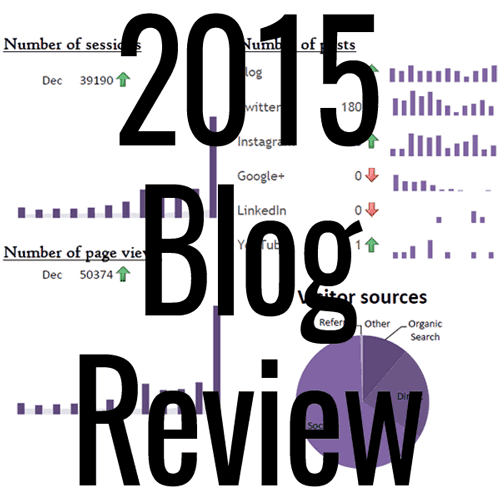 I really should analyse mine I guess – eek! Thank you so much for all your hard work setting up Oxfordshire Bloggers. I look forward to seeing what 2016 has in store for you Kate x

My pleasure Mary, the group is turning in to a lot of fun.

I love spreadsheets, so let me know if you’d like me to analyse yours Mary, obviously out of blogger friendship and nothing to do with finding out the secret to your success 😉

Ha ha. Yay to be being top commenter. Just shows how much I talk I suppose, and all the opinions I have.

Congrats on the huge December. That really was a massive month.

Looking forward to more on Oxf Bloggers. I’m on the way to dropping my role in my local NCT branch once I’ve handed over, so if you need any help on it, let me know.

What is even better is the traffic appears to be staying fairly consistent now, yeah for Pinterest.

I’m sure there are things you can do to help Oxfordshire Bloggers become bigger and better. I’ll be in touch …