If you’ve ever thought about water inequality, it is probably in a similar context to this picture; contrasting a resident of an Indian slum carrying water while walking along a large pipe taking water to more affluent areas (thank you to Meena Kadri for the great picture). 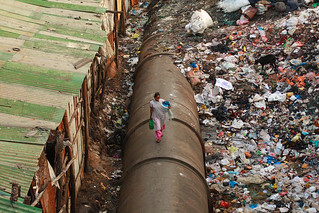 However, water inequality is a complex issue; much wider than rich and poor people’s access to water. It can be seen in many ways, with different ‘winners and losers’. Here are a few examples including many questions because I don’t know the answers.

As we need water to live should individuals have the right to access it, or should businesses have priority as they bring economic benefits to the area? Businesses often have the power to gain access to water or the money to build the necessary infrastructure such as deeper boreholes. A slight deviation off topic, but are businesses an easy target to blame for water shortages? Coca-Cola’s use of water in India is a topic that has been ongoing for years; e.g. Indian officials order Coca-Cola plant to close for using too much water and What has Coca?Cola done to ensure water is used responsibly in its operations in India

If you use river water should you have more rights to the water if you are upstream? How do you define how much water each person can have when the flow naturally fluctuates for example with rain fall or rivers combining. Also is it fair for the an upstream business to pollute the river impacting everyone further down the river?

And what about if that river flows through more than one country? Who owns the water? Is it the country the rain falls in, or do the downstream countries have a claim to because a river runs through their country? There are 11 countries who have some land within the Nile river basin and how do you approach sharing the water and preventing conflict between the different countries?

If people are given water allowances is this based on equal volume or need? If it is done based on need, how do you measure need? Looking at this from a business perspective, some sectors use more water than others for example food and drink businesses use significantly more than commercial businesses. However the water used between two similar business can vary because of the actions taken and equipment purchased, for example the water used for cleaning can be reduced by installing equipment such as presence detectors so water is only used when there is something to clean. Does a business who has not invested in efficient equipment ‘need’ more water? Is it fair for them to be given a larger allowance just because they haven’t invested in water efficiency?

Water is also used to in the production of food and energy and these are so interlinked they have become known as the ‘food energy water nexus’. Looking specifically at food, where is the balance between water to drink and water used to produce food. It takes 1000m3 of water to produce a tonne of wheat and 16000m3 to produce a tonne of beef; is that a fair use of water? And what about when that food is transported to a different country, meaning that the producing country loses water and the purchasing country gains water;  ‘virtual water’ or ’embedded water’.

The average water used a day by the many people who don’t have access to water in their home is 20 litres of water day. Compare this to the average 150 litre in the UK where it is not unusual to have baths, showers, toilets, washing machines, dishwashers and some homes have swimming pools and hot tubs. Is it fair that in the developed world we use so much water for non essential purposes.

The more water we use the less is available to the environment, impacting on the animal and plant life. We are using so much water it is having an impact on the landscape, for example the Dead Sea and it is possible the damage in some places will be so severe it will not be possible to reverse.

I’m sure there are still other views on water inequality, but I hope I’ve shown that it will not be easy to solve water inequality, particularly as it needs to be solved at a global level. However, it is probably the same as with other types of inequality that it is people without power, whether financial or political, who will be the ones who suffer the most.

“With population rising and demands on the world’s water expanding, so the argument runs, the future points to a “gloomy arithmetic” of shortage. We reject this starting point. The availability of water is a concern for some countries. But the scarcity at the heart of the global water crisis is rooted in power, poverty and inequality, not in physical availability.”