International Women’s Day is celebrated around the world on 8th March; recognising the achievements of women for over 100 years. Tanya, Annie and Penny, the Team Honk founders, are learning about female achievements in Tanzania thanks to Sport Relief. Working with The Gatsby Trust donations have helped created female entrepreneurs leading to lasting change for women, their families and communities and beyond – rippling out #lastingchange in Africa (find out more at the bottom of the post).

Sport Relief funds projects in Tanzania that “provide mentoring, coaching, technical and business training to women in three areas – food production, textiles and soap making”. One of the women they met is Eliafura a batik artist who sells her patterned materials to the local community. To help celebrate Eliafura’s achievements Tanya, Annie and Penny sent me a digital postcard of Eliafura and one of her lovely and bright batik pieces (that they bought).

Eliafura makes the most beautiful batiks and tie dyed material. With the support of the Gatsby Trust Eliafura has registered her business and learned important health and safety rules around the chemicals she uses. Eliafura now also trains other women in the village who bring material to her and she shows them how to create these beautiful patterns. They sell easily to not only local schools where teachers like to buy them but also overseas. We bought her entire stock because we loved them all so much and are now working out how to sell them on so we can complete the circle of donation, funding, training, selling, donating.

You can read more about how Eliafura makes her batiks on Penny’s website. I found it fascinating to read because I made batiks as part of my art GCSE, but they were no bigger than A4; I’ve now learnt the secret of making really large pattens – a sponge pattern.

I love the colour of the material in the picture and I keep thinking what would I do with it, make a skirt, bag, cushion. I look forward to finding out the Team Honk plans. What would you do with it?

How can you help?

Please RT, share and support any updates you see with the #lastingchange hashtag.

GET INVOLVED Join up for your local Sport Relief event here.

Please continue to support #teamhonkrelay, we will be cheering them madly too!

Why the Gatsby Trust?

Comic Relief has awarded Tanzania Gatsby Trust a grant of £264,959 over three years so they can continue helping women in Tanzania.

The number of women running small businesses in Tanzania has increased dramatically in the last 20 years; but these women have faced many challenges, for example, harassment, and demand for bribes from police and officials.

They also face challenges as a result of their gender, a culture that sees them primarily as wives and mothers rather than businesswomen, the demands of being primary carer, their lack of influence in decision making at home and beyond. Loans and finance are harder to access as a woman. Lack of education leaves women without essential literacy and numeracy skills they need.

The Gatsby Trust helps 1000 female entrepreneurs by educating both women and their partners about women’s rights and providing support and training, it has been around since 1992.

The stastistics speak for themselves:

The UK Government matchfunded the £16 million which Comic Relief had already committed to spend helping change the lives of women and girls across Africa, using money raised through public donations for Red Nose Day 2013.

This combined total of £32 million from DIFD and Comic Relief will:

“The message is clear – we must help to give girls and women a voice if we’re serious about transforming not only families and communities, but economies and whole countries as well”

Tanzania is a politically stable country, but, it is still one of the poorest countries in the world with one third of its population living below the poverty level and over half of the rural population living with no access to an adequate water source.

We will be in Dar es Salaam, one of the fastest growing cities in the world. Unfortunately, this rapid urban expansion also means Tanzania has one of the highest rates of slum growth in Africa. The UN estimates that 70% of the population of Dar es Salaam now live in slums.

Tanzania has spectacular nature and wildlife including Africa’s highest mountain, Kilimanjaro, and national parks such as the Serengeti. The country’s main exports include gold, sisal, cloves, coffee, cotton, cashew nuts, minerals, and tobacco. Yet trade is still an issue. If Africa could regain just an additional 1% share of global trade, it would earn $70 billion more in exports each year – more than double what the region currently receives in aid.

Since Comic Relief began it has funded 128 grants to organisations working in Tanzania to the value of over £46.8 million.

Stats thanks to Comic Relief. The trip has been funded by public donations, this is further explained here 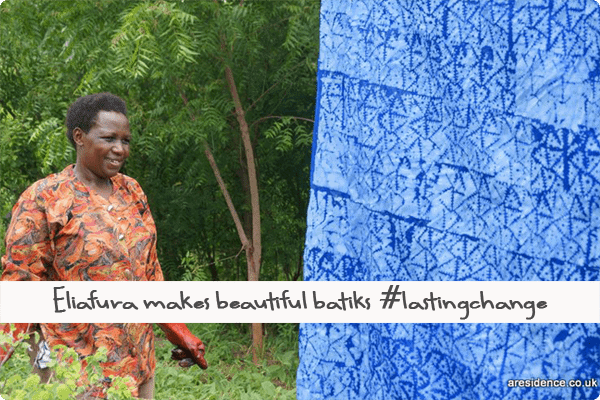 Fab postcard. I tried batik in art too. I love these and would love to know what team honk decide to do with them. All these postcards are so inspiring x

Yes, the postcards are very inspiring and I think it is fabulous to see how the women are training others to share their knowledge and experience. I still have some of my batik from GCSE maybe we’ll find somewhere to hang it on the wall once we’ve finished the work on the house (of course I don’t where it is at the moment).

There’s so many inspirational women out there; team honk are doing an amazing job at showcasing some fabulous one. But International Women’s Day is really important for remembering all that still needs to be done to gain true equality for women. There is so much still to be achieved for women.

Yes there is a lot to be achieved for women, but I hope as the nature of work and society changes there will be greater opportunities. There are so many new job types being created there is no tradition of them being a man’s job so I hope women will be accepted in to them.

I loved hearing about everything the Team Honkers were seeing in Tanzania, and I think it’s great what these amazing women have managed to achieve (the women in Tanzania and the Team Honk founders).

Absolutely, and I’m amazed at the energy of the Teak Honk founders

I have just loved reading about these women in Tanzania, so inspirational.

Absolutely. It is great to see a charity helping people who are then helping others.

This is really eye opening post.
Some numbers are shocking, especially than 1 in 5 children is involved in child labour.
Need change!
Need it now!

I agree and it is great to see that changes are happening.