Memories of my mum

My mum recently died after fighting cancer for 10 months. It came as a shock to everyone in the family because the original diagnosis was very positive. I spoke at her funeral and evening prayers and want to share my memories with people who were not able to attend.

An illustrated version of my eulogy

I’ve been lucky to have mum as a constant in my life for 34 years. In fact, my first memory is of Mum, or at least her legs. I’m probably about a year old and standing in the hall at home, holding on to a trolley with bricks in, watching mum speak to someone at the front door.

Standing up here feels a bit strange as we are not a family who speak publicly about feelings or say I love you frequently because we demonstrate it through actions. For instance despite having 2 children of my own, mum would still buy me an advent calendar and Easter egg, and not just any chocolate, this year it was Lindt.

Something I did tell mum several times over the last few years was that I’ve found it increasingly embarrassing to go out with her. We both had style consultations at a similar times and both removed certain colours from our wardrobes, such as black. However Mum implemented all the suggestions buying new clothes in the appropriate colours and style, and consequently looked very good. When we met, I frequently asked where she’d bought different items.

Family was important to Mum, which is good because when she married Michael her daughters increased from 2 to 5. She also ended up with 12 grandchildren and was present at the birth of 4 of them. Her youngest grandchild is my

son M who was born November last year. Her cancer was diagnosed two months before his due date and my first thought was would she see him. Not only did she see him when he was 5 hours old on Skype, she was able to develop a

relationship with him. He may not remember Grandma, but I will be able to tell him that he always had a smile for her; she was there the first time he sat on his own and was the 1st person after me to see him roll. I called her on Skype, put the computer on the floor and like a very obedient boy he rolled straight over. Mum also used Facebook to keep up to date with family; she didn’t add many updates, but was very good at writing comments and it will be nice to look back on those in the future.

I live closer to my cousins on Mum’s side of the family now than at any point previously, enabling us to meet up more easily. Mum told me several times how pleased she was that we were continuing the family connections and not relying on our parents. She was even more pleased that the first time both cousins and their children met at our house happened to be a weekend she was already booked into visit us. So as well as seeing her 2 grandchildren, she saw her 2 nephews, great niece and great nephew.

Read moreHow is the darktea brewing? #2

Mum was very influential in my love of books. Somehow she arranged for me to have library cards in two different councils. And at the start of the summer holidays she would take us to a second hand bookshop, give us some money and tell us to spend it all on books to take away with us.

Recently she had expanded her reading through membership of several book clubs where she was able to combine the pleasure of books and meeting friends. However, you may not know she was a published author. Okay not many of you are likely to be looking for books on financial accounts or Sage Accounting software, but I don’t think Mum ever realised how special it was to be published and how many people would love to be chased by publishers as she was at times. At one event she asked a publisher if they had a book on a certain topic that she would be lecturing the next year, their response was no, would she like to write one for them.

Although Mum worked as an accountant and lectured at several different universities, my main memory of her work is marking exam papers; maybe because boxes of papers took over the house or because it provided my sister and me opportunities to earn money. Mum paid us a very good hourly rate to double check she had added up the marks on each page correctly and to transfer the marks for each question on to the result sheet (or what we called blobby sheets).

For several years I worked on a Government programme called Envirowise that helped businesses reduce their waste. Mum often said she didn’t understand what I did so she took an opportunity to attend one of our workshops on resource efficiency for the finance sector. Apparently it didn’t help her understand my role, but did provide her useful information for one of her lectures.

Read moreHow is the darktea brewing? #1

I have very few memories of mum cooking meals, although she did teach me how to cook for my guide badge. While the other girls were doing quick stir fry and fruit salad, I did lasagne and marble sponge cake. However, I am now known amongst my friends for my lasagne. But I have lots of memories of her baking. To prevent arguments between my sister and me about who got to eat the left over raw cake mixture, Mum would give one of us the beater from the food mixer and one of us would get to scrape the bowl; it was always difficult to judge which had the most mixture.

Her speciality was sponge and butter cream, either as butterfly buns or Victoria sponge. She made these so often that she gained the name Grandma Cakes and it was suggested at the tennis club she should take something different to the tennis teas in future (I believe she started taking the grandchildren’s sweetie jar).

I also enjoy baking and Mum thought it was great to see this enjoyment continuing to my daughter who used to describe her days at nursery as being good or not depending on whether she had done baking.

Mum also taught me to knit when I was 3. Apparently she wanted to teach my sister but she wasn’t interested. I remember my first piece used scraps of wool and got narrower and narrower as I dropped stitches. I’m particularly amazed at mum’s patience, as I have recently tried teaching B to crochet and pretty much got nowhere.

Mum enjoyed playing and watching sports. I know she played hockey when she was younger, but all the time I’ve known her it has been badminton and tennis. As she got older she found she had to make a few adjustments to her tennis; she had to get used to having younger partners and reducing the number of games (although the points were short enough to get her breath back in between). In fact, it wasn’t long after moving house before she was asked to play a tennis match; I think it was her first visit to a tennis club.

My sister and I were probably a slight disappointment to mum as neither of us enjoyed playing tennis; maybe it was all the Saturdays I was made to spend at the tennis club. My sister favoured swimming and I rebelled by playing squash, the one racquet sport mum didn’t play. However, we did do sport together through cycling holidays around the Scottish islands and Norway, but Mum drew the line at spending the night in some of the dubious accommodation we found such as football changing rooms and derelict shops and found B&Bs instead. Her grandchildren have provided ample opportunities for her to feel proud through a variety of sports, particularly cricket and rugby.

At the start of this year I started writing a positive journal where I write up to 6 lines each day of the good things that have happened during the day or that I’m grateful for. It has not been easy over the last few weeks and I was tempted to miss some days, but decided it was even more important to think of positives on those days. I want to finish by sharing some of the positives I found

It has only been a few weeks since Mum died, but I am already missing her loads. I’ve wanted to tell her that M has started crawling, our progress on moving house and the fun B had when a friend put up a bouncy castle in the back garden. However, I am remembering the wonderful things people told me about her and I am continually touched by the cards and messages people have sent to the whole family. Mum certainly made an impact with her life and I hope I can follow her example. 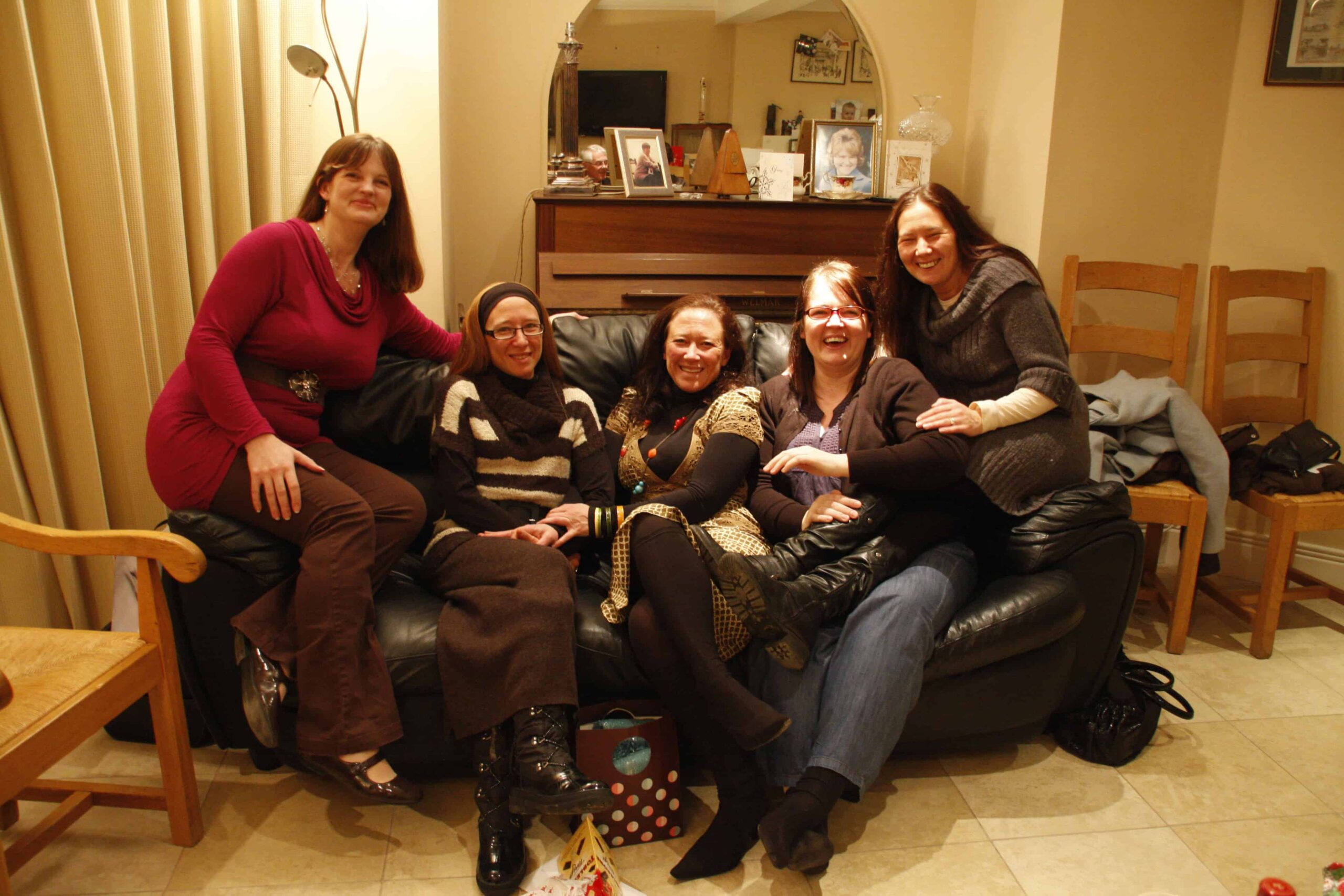 This was so lovely to read, I cannot imagine what you are going through but these words were so nice to read. You have a great way with words and I was so emotional reading this. It makes me remember what a great person you were to work with.

All my love to you and your family.

Beautiful. You are so brave. Sending hugs xxxx

Thank you Suvi, and for your text and FB messages. We’ll meet up soon I hope.

Kate, what lovely words… so brave of you to have stood up and spoken; your mum would have been so proud of you.

Thank you Louise. And thank you for your support in providing a sense of normality for the rest of the family (if you can class a brewery tour and school fair as normal)

Such a lovely post. I can’t believe you were able to speak at your mum’s funeral. I know I’d not have been able to at our mum’s.

So nice that M was able to experience being with your mum even if he can’t remember it now. My Dad died when my brother was 2 weeks old and it must be so hard for him not to have known him.

Thank you Emma. It was something I wanted to do after going to a few funerals and hearing family members talk. One of my step sister’s spoke as well. I found it easier to read than I expected although I remember two wobbles when I spoke about M and when I saw someone for the first time.

I agree that must have been hard on your brother, how old were you? My Dad left when I was 12 but I still saw him once a week so he wasn’t missing.