We’ve finally given our children a laundry basket

You may wonder what we think is so dangerous about laundry baskets that we’ve kept them away from our children for seven years. Obviously, we don’t actually have anything against them, in fact we’ve had a very practical one in our bedroom from before having the children. Being able to separate clothes in the bedroom means I won’t discolour my husband’s shirts in the white wash and he won’t shrink or misshapen my handwash items, so we’re both happy.

When it comes to the children, I want them to learn to deal with their clothes each day by either putting them away or in the laundry basket, so I have to admit the reason they don’t have one comes down to forgetfulness or maybe apathy. When my daughter was born we used a plastic waste paper basket, that used to be in the study that became the nursery, to collect her dirty clothes. That worked fine with small clothes, but seven years later with two children it is now too small, and has been banged around quite a lot so is now broken. Yes our children use a broken waste paper basket instead of a laundry basket; aren’t we the best parents!

I really haven’t thought about what type of laundry basket the children should have (I guess that is the apathy), but fortunately for them, House of Fraser have helped out by sending one of their laundry baskets, and I have to admit it is great. It is a stripey, rope basket and is large, soft and sturdy so won’t break if it is hit by the door and can easily be carried with one hand (important as we always have more than one thing to carry downstairs). My only concern about it is the pale colour, and wonder if it is appropriate for the children’s bedroom. But then it is not a toy so hopefully won’t be coming into lots of contact with things that are likely to stain it like paint or food, although my son has already said he wants to use it for hide and seek so maybe I actually need to be concerned about how it will deal with a bit of rough and tumble.

I’m still not going to get excited about laundry baskets, but I have to admit that I’m very pleased with this one, and even more pleased that I don’t need to think about buying another one until we’ve done the work on the house and the children have separate bedrooms.

The laundry basket we were sent is the Gray & Willow Rope Laundry Bin and is available on the House of Fraser website for £30. Smaller containers are also available in the same set.

*Disclosure – We were sent the laundry basket in exchange for an honest review. 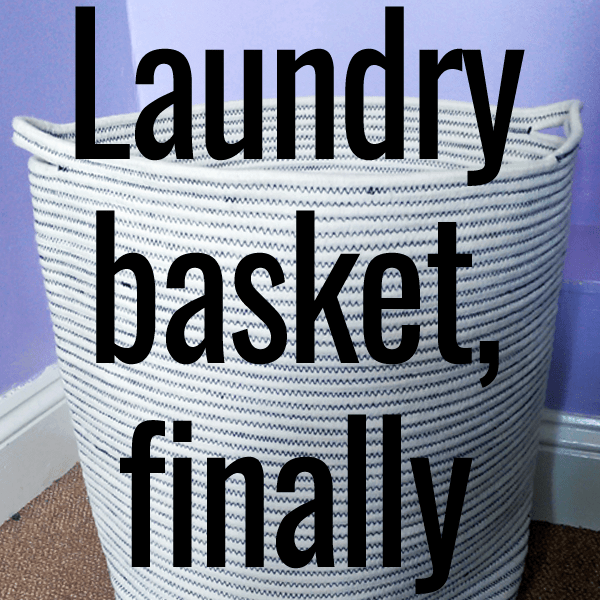 That’s a gorgeous basket, I love how easy it looks to pick up by the handles and it looks so smart.. I’ve only ever had one laundry basket for the whole family which lives in our wardrobe. I find it easier to have all the washing in one place, but it does mean that the children aren’t really involved in helping out as I tend to just collect it all up myself and it appears back in their drawers clean and folded, perhaps that’s something I should rectify!

It is a lovely basket and I managed to carry it with one hand last night even though it was full to overflowing. The children originally got a “laundry” basket because it was easier for us to not have to walk to our room to combine it with our, plus we tend to wash the clothes separately so it has rarely been an issue that we have laundry in two places. I think it is a good idea for children to have some involvement in the laundry process, although ours are currently just limited to putting clothes in the basket and I sometimes wonder if they are a bit enthusiastic and put clothes in there instead of putting them away!